(Note: My name is Joe Heininge and I live in Puerto Vallarta. I wrote this blog post for assignment #1 of the Intro to Music Production Course on Coursera)

I’ve played classical, nylon-string guitars since I was 11 years old. About a year ago, I bought a steel-string guitar for the first time, and I’m still having trouble getting used to the difference in sound. I have an electronic tuner so I’m sure that they’re both in tune. So, why does the steel-string guitar sound so different? So ringing, so bright, almost twangy, when compared to the warm smooth tones of my classical guitar?

Isn’t sound simply vibrations in the air? And if I tune both sets of strings to the same frequencies, shouldn’t the sounds they produce be identical? Why is this not the case?

The term timbre is used to describe the characteristics of a sound that distinguish it from other sounds of the same pitch and volume. The terms tone quality, tone color, and texture, are also used.

But what causes these differences in timbre? If sound is produced by vibrations in the air, how is it possible for us to distinguish two pitches that are played at the exact same pitch?

The answer is that “pitch” is a lot more complicated than we sometimes make it seem. We tend to equate certain pitches or notes to specific frequencies. For example, when I tune my guitar, I tune the A string to 440Hz.

In real life, however, almost no instruments are capable of producing a pitch that consists of only one frequency. The actual sound produced is a combination of pitches. The lowest, called the fundamental frequency, is the one that we identify as the pitch. But the other pitches above it, called partials or harmonics, play a very significant role in coloring the sound. Harmonics are frequencies that are whole number multiples of the fundamental frequency. So, when we hear a guitar string playing A, we’re hearing 440Hz, but we’re also hearing 880Hz, 1760Hz. And there are also other frequencies present called partials, which are not whole number multiples of the fundamental frequency.

How is it possible for one string to produce multiple pitches at the same time? The answer might blow your mind a little bit. You see, the string isn’t just vibrating along it’s entire length. It’s also vibrating along various different lengths at the same time. Sometimes you can see this with the naked eye, and sometimes the camera captures it pretty well, like in the first 30 seconds of this music video filmed by friend Richaud Valls:

If you need further proof, take a look at this spectrum analysis of the sound produced by the high E string on each of my guitars. Frequency is depicted on the x-axis, so each of the spikes in the graph represents a frequency of sound that is being emitted by the string at a given moment in time: 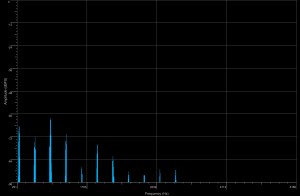 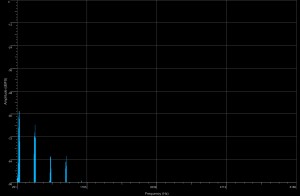 Notice that the one on the top, the steel-string, produces many more harmonics in the upper range. This is what causes my steel string guitar to sound so much brighter.

For a more extreme timbre contrast, consider the difference between whistling and singing. Below is a spectrum analysis of me whistling a C4 note, and below that is me singing it. 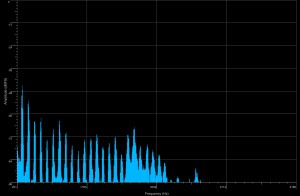 I think this demonstrates one reason why singing is way more popular than whistling: it produces a much richer, more complex tone. The natural harmonics present in the human voice create a sense of warmth and texture.

Another important factor in timbre, that’s related to harmonics, is something called inharmonicity. Going back to the example of the guitar string, we can theorize that the string will vibrate along different lengths, each of which is a whole number division of the overall length of the strength. In real life, however, the string is stiff and resists vibration. Some frequencies are resisted more than others, and this causes certain harmonics to be slightly out of key from what the “perfect” mathematical harmonic would be. However, in many cases, we are accustomed to this, so much so that makers of digital pianos have found that they have to reproduce the inharmonicity created by piano strings in order for listeners to perceive the sound as warm and natural.

This factor of inharmonicity also explains why the steel-string guitar sounds slightly out of key to me, especially on the higher strings – the steel strings are stiffer and more resistant, so they produce more inharmonicity. Most people who play steel-string guitars are completely accustomed to this. To them, my classical guitar sounds soft and dull, lacking the complex upper harmonics of steel strings.